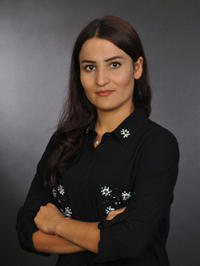 Badeeah Hassan Ahmed was eighteen when ISIS invaded Kocho, her village in Northwestern Iraq. ISIS killed many of her loved ones and abducted women and girls to sell off in a ruthless human trafficking operation. Badeeah lied to ISIS, saying her three-year-old nephew Eivan was her own son. After two months in captivity, she and another woman named Navine were sold to al Amriki, the American, who was head of weapons for ISIS in Aleppo. Throughout her ordeal, Badeeah managed to keep Navine and Eivan’s spirits alive by telling folk stories and reminding them of their strong Yazidi spirituality, which seeks peace and enlightenment even in the darkest of times.

When Badeeah managed to escape ISIS with Eivan and Navine and it was discovered that her abductor was an American, Badeeah became a popular fixture with foreign media. Of the survivors of the ISIS attack, at first only Badeeah, who initially used a fake name, and her cousin Nadia Murad felt comfortable speaking to the press. Badeeah worked with the US State Department to identify her captor and spoke at United Nations conferences. While she lived in the refugee camp in Kurdistan designated for Kocho survivors, she volunteered with the WADI and Jinda foundations as well as Khalsa Aid, giving out food and supplies.

Today Badeeah studies languages and nursing in Germany. She lives with her nephew and his mother. Her goal for the future is to share with humanity the gentle, peaceful faith of her Yazidi culture and give back to her people.

A Cave in the Clouds