In this excerpt Philip has come home from school and runs to the toilet as refuge from his mother. He is desperate to read his poetry class assigment because he is seeking a solution to his lovelorn state for a classmate by the name of Lucy. Ang is his best friend. “Just then my cell rang. It was Ang. What do you know? You just have to call out for help and help comes!“You’re psychic,” I said. “Am I?” he said, sounding surprised. “You’d think I’d know that much, then. ”He was eating chips. I could tell by the deafening crunch. Food is the love of Ang’s life. I didn’t say too much about it before because he’s self-conscious about his weight and I didn’t like to draw attention to it. I thought I could hear Mom outside the door again, so I lowered my voice. “I need your help,” I whispered to Ang. “Why are you whispering?” he asked. “Because I’m on the toilet. ”“Yeuch!” he groaned. “You’ve put me off my chips. ”“Ang,” I pleaded, “you’ve got to help me. ”“You want me to come and rescue you from the toilet?”“Poetry sucks,” I said, trying to ignore his chomping. “What do you want me to do about it?” Ang mumbled through his chips. “Explain it,” I said. “How should I know?” Ang said. “I’m no poet. ”“You were there that day in class. ”“So? I was there when I was born, but I don’t remember any of that. ”You can’t argue with logic like that, so I didn’t. “You said this Lucy poem was good,” I accused him. “No I never. I said it was about someone called Lucy. ”“Ang, you told me it was about unrequited love. ”“No I didn’t. I said we did a poem about unrequited love and that we did a poem about someone called Lucy. I don’t know which is which. We did another poem too but I can’t remember what it was about. ”“Sore buttocks,” I said. “Really? You’d think I’d remember that. ”I was starting to think maybe Ang knew as little about the poems as I did. “Listen,” I said. “Finish your chips and focus. What is the Lucy poem about?”“Dunno. ”“Try! This is important. ”“OK. ” Ang swallowed loudly. “I think Mrs. Gray said Wordsworth wrote this poem about nature or love or something. And that he was obsessed with Lucy, but that she might be a figment of his imagination or an idea or something. ”An idea! “You mean Lucy wasn’t even real?” That’s when I lost all respect for Wordsworth. I mean, who invents girlfriends that might possibly be ideas for themselves? I could hear Ang munching away on his chips again without a care in the world and I wanted to throttle him. Maybe he’d gotten it wrong. “God, Ang! concentrate,” I squawked. “Help meeee!”I must have shouted that last bit because Mom came thundering up the stairs and started banging on the door. I was so startled I nearly peed myself. Which wasn’t really a problem, because I was sitting on the toilet, but still, you like to be in full control of your bladder. “Philip? Are you all right?” she said through the door. Her voice was all panicky. Seriously, what did she think could happen to me sitting on the toilet?“Let me in,” she squawked. Let me remind you: I am twelve years old, nearly thirteen. I do not need help in the bathroom. “Go away!” I hissed at her. “Be like that,” Ang said, all huffy. “Not you,” I explained. “Her. ”“Her?” Ang squawked. “Have you got a girl in there with you?”“Shut up, you pervert!” It was my turn to squawk. “Don’t you speak to me like that,” Mom cried. “You come out here right now. ”“I’m sorry,” I said. “I didn’t mean you. ”But she wouldn’t listen. She started banging on the door again. “Go away!” I yelled. “That’s it,” Ang said. “I’ve had enough. ” But he didn’t hang up. Just then, Mom began to cry. Real big choky sobs. “I didn’t bring you up to talk to me like that,” she wailed. “I’m under a lot of stress right now,” she sobbed. “I need your help and …” (sob) “… love. ” And then she blew her nose. It sounded like an elephant being slaughtered. “I’m sorry,” I said. “You know I love you. ”“You what!” Ang screeched down the phone. “Not you, you creep,” I said. “Who are you calling a creep?” Mom said, and started bawling all over again. I was thinking the only way out of the situation would be to put my head down the toilet and flush, when the doorbell rang. “Who’s that?” Mom said, sounding a bit panicked. “How the heck should I know? In case you hadn’t noticed, I am on the toilet!”The doorbell rang again and the person outside lifted the letter flap. “Yoo hoo! Kathy, let me in,” the person cooed. “I come bearing gifts. ”

What do you do when you’re a twelve-year-old kid and your mother gets breast cancer?Philip Wright is twelve years old and life is pretty good. He has a comfortable relationship with his mother and gets reasonably good grades – in spite of girl problems, teacher problems, bully problems and – well, poetry problems. Philip’s happy-go-lucky life is disrupted when his mother gets breast cancer. Bad enough that your mother is seriously ill – but could she not have developed a less embarrassing kind of cancer – toe cancer, maybe, or ear cancer?Philip’s attempts to cope with his situation are both hilarious and touching amidst his confusion and bewilderment. When his mother is devastated to lose her hair Philip stands in solidarity. Through it all, he writes letters to his hero, a comedian by the name of Harry Hill. Philip looks for advice from Harry, but gets no response to his many highly amusing and urgent appeals for guidance as an aspiring comic, and as an adolescent in need of advice in matters of life and love.

“Middle-grade readers will identify with Philip’s conflicts with his best friend and his antics to win Lucy’s affections. ”

“funny, moving and strangely empowering in its determination to laugh in the face of the seemingly unbearable”– John Connolly, New York Times Bestselling author of The Book of Lost Things‘The story drives along at a rollicking pace – the comedy and the serious matter of potential tragedy harmonising nicely. ’– The Irish Times“The light-hearted touch in this story stops it from becoming a maudlin tale about illness, which is particularly clever given the subject matter. Instead, it is a down-to-earth, funny, emotive story which has you laughing and crying at the same time. ”– The Book Activist

“This engaging, affecting novel strikes the right balance between lighthearted humor and sensitivity in its portrayal of a difficult crisis. ”

When the Worst Happens

When I Was Eight

The World in Your Lunch Box 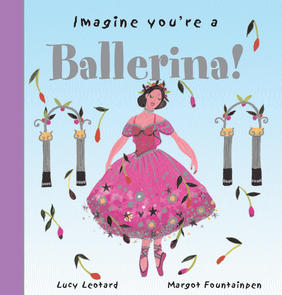 Imagine You're a Ballerina