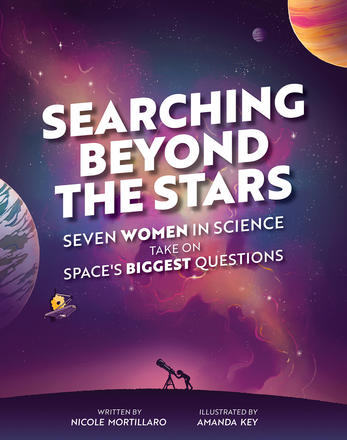 Searching Beyond the Stars

Introduction | Opening Up the Universe

The author explains that growing up, her image of scientists was limited to what she saw on TV, in the movies, and on the news—and it usually meant men in lab coats. As she got older and became interested in space exploration, she realized that there are so many women who have made incredible contributions to space science, but their achievements are often overlooked. The work done by the women featured in the book is expanding our understanding of the universe and what it means to be a scientist.

Leading the Race | Katherine Johnson Takes Us into Orbit

While working to calculate the trajectories of the first-ever American space flights, Katherine Johnson was up against remarkable odds: the fear and paranoia prompted by the Cold War, the mounting pressure of the space race, and entrenched racism at NASA. Her math put people on the moon—and brought them back safely—and astronauts trusted her abilities more than they trusted computer calculations. Sidebars in this chapter cover the forces behind flight, the realities of racism in America at the time, and the history of women working at NASA.

Ears on the Sky | Jill Tarter Listens for Alien Life

Are we alone in the universe? Jill Tarter spent 30 years trying to figure it out. Rather than using telescopes for her search, Jill was listening for alien life using radio and creating a catalogue of star systems that could potentially be home to habitable worlds. As a pioneer in her field, Jill helped legitimize the search for extraterrestrial life as a crucial area of space science. Sidebars in this chapter cover the science behind radio technology, the Fermi paradox, and the Drake equation.

As a science communicator, Emily Lakdawalla takes complex information and makes it accessible to the public. Her powerful narratives immerse readers into the complexities of space exploration, encouraging curiosity and citizen science. Perhaps most importantly, she helps us understand exactly why science is important and why we should care about space. Sidebars in this chapter cover the Artic-Mars analogue, the science behind imaging, and the study of Pluto.

Mars may share more similarities with Earth than any other planet in our solar system, but there’s still so much we don’t know. Tanya Harrison’s work with the rovers on Mars and the images collected by the Mars Reconnaissance Orbiter has helped uncover everything from geological features to weather patterns to the possibilities of water on the planet. Sidebars in this chapter cover the history of Martian “canals,” the impact of space on our bodies, and the differences between Earth and Mars.

While Jill Tarter searched for alien life using radio signals, Sara Seager takes another approach—searching for planets that have characteristics that might make them hospitable to life. With trillions of stars in the universe (each one of them with possible planets in orbit), it’s a monumental task facilitated by incredible technological advances, from new telescopes to the possibilities of starshades. Sidebars in this chapter explain the habitable zone, the discovery of the first exoplanets, and the strangest ones we’ve found so far.

How did the universe start? What is it made of? How long will it last? Renée Hložek is working to answer some of the most complicated questions we can ask about existence itself. By analyzing cosmic microwave background radiation observable by telescope, Renée is puzzling out the origins of our universe—and how it might one day end. Sidebars in this chapter cover the discovery of dark matter, the expansion of our universe, and the science of CMB imaging.

While Sara Seager’s work aims to find exoplanets using telescopes and imaging, Ashley Walker’s efforts as an astrochemist are focused on the microscopic—namely on extremophiles, organisms that can survive with little sunlight or even oxygen. In her words, chemistry helps us to understand the building blocks of life, whether she’s researching them in Titan’s clouds or in the clouds of debris that first created our solar system. Sidebars in this chapter cover racism in science, the Cassini mission, and the characteristics of Titan.

Conclusion | Into the Great Unknown

For every great discovery in space science, there are a hundred new questions raised that have yet to be answered. The work done by the women featured in this book will help us continue to unlock the mysteries of space—and the readers themselves may be among those who pick up the torch in the future.

Are we alone in the cosmos? Could we one day live on a different planet? How is life formed? What other secrets does the universe hold?

Through profiles of seven remarkable women scientists and their achievements in their respective fields, Searching Beyond the Stars takes us deep into space, looking at once to the distant past and the distant future to capture the awe and intrigue of some of the biggest questions we can possibly ask.

Making connections across astronomy, chemistry, physics, history, and more, Nicole Mortillaro draws on her own experience as a woman in STEM to highlight the incredible odds each scientist faces while chasing new discoveries and the ways in which sexism and racism, among other barriers, still affect women scientists to this day. Sidebars filled with fascinating facts take readers behind the science and encourage them to delve deeper. Vibrant illustrations by Amanda Key showcase the wonder of space and the passion and eternal curiosity that drive each scientist in their work unfurling the mysteries of our universe.

Jill Tarter, radio astronomer and project scientist at NASA. Opened up possibilities for communicating with aliens. Lives in Berkeley, California.

Sara Seager, astrophysicist and planetary scientist. Credited with laying the foundation for the field of exoplanet atmospheres and the search for life on exoplanets. Originally from Toronto, Ontario, Sara now lives in Massachusetts.

Tanya Harrison, planetary scientist and geologist. Was on the science operations team for NASA’s Mars Reconnaissance Orbiter analyzing imaging from a geologist’s standpoint to see whether we might one day live on Mars. Director of Science Strategy at Planet Labs. Lives in Washington, D.C.

Renée Hložek, astrophysicist and cosmologist. Her work is to imagine, dream, and calculate the mathematical equations that govern and predict the end of the universe. Originally from South Africa, Renée now lives in Toronto, Ontario.

Ashley Walker, astrochemist, science communicator, and activist. Co-organizer of #BlackinChem, #BlackInAstro, and #BlackInPhysics to highlight and amplify the voices of Black researchers and scholars in these fields. Lives in Chicago, Illinois. 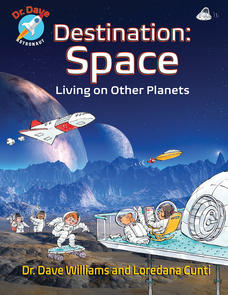 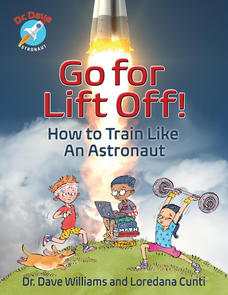 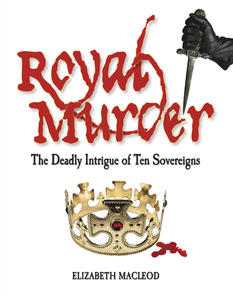