Allan Stratton was born in Stratford, Ontario. Before he was two, he and his mother went to live with his grandparents, first on a farm, and later in the town of Kincardine. While his mother taught history, Allan listened to fairy tales and classical music on a child’s record player. These records sparked his imagination, and a lifelong passion for reading and writing. At the age of five, he was organizing his friends in plays, performed for their parents in the backyard. In grade six, his class produced a fifteen-minute play he’d written about Henry Hudson. By grade eight, he was reading a book every couple of days, with a taste that ranged from comics to Shakespeare.
Chanda’s Secrets (2004) takes readers into the whirlwind of the African HIV/AIDS pandemic. Stephen Lewis, UN special envoy for HIV/AIDS in Africa says of the book, “Chanda’s Secrets is a novel with the lilt of Africa in its language and the urgency of adolescent struggle in every paragraph.”
Chanda’s Secrets has been published around the world and has won dozens of international awards and citations, including the American Library Association’s Michael L. Printz Honor Book and the Children’s Africana Best Book Award for the Older Reader. It was recently made into a feature film, Life Above All, which won the prestigious François Chalais prize at the Cannes International Film Festival. It is South Africa’s official selection for the 2011 Best Foreign Film Oscar, and has been released in North America by Sony Pictures Classics. 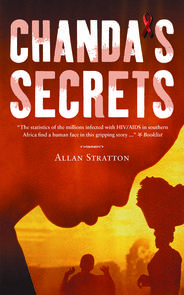